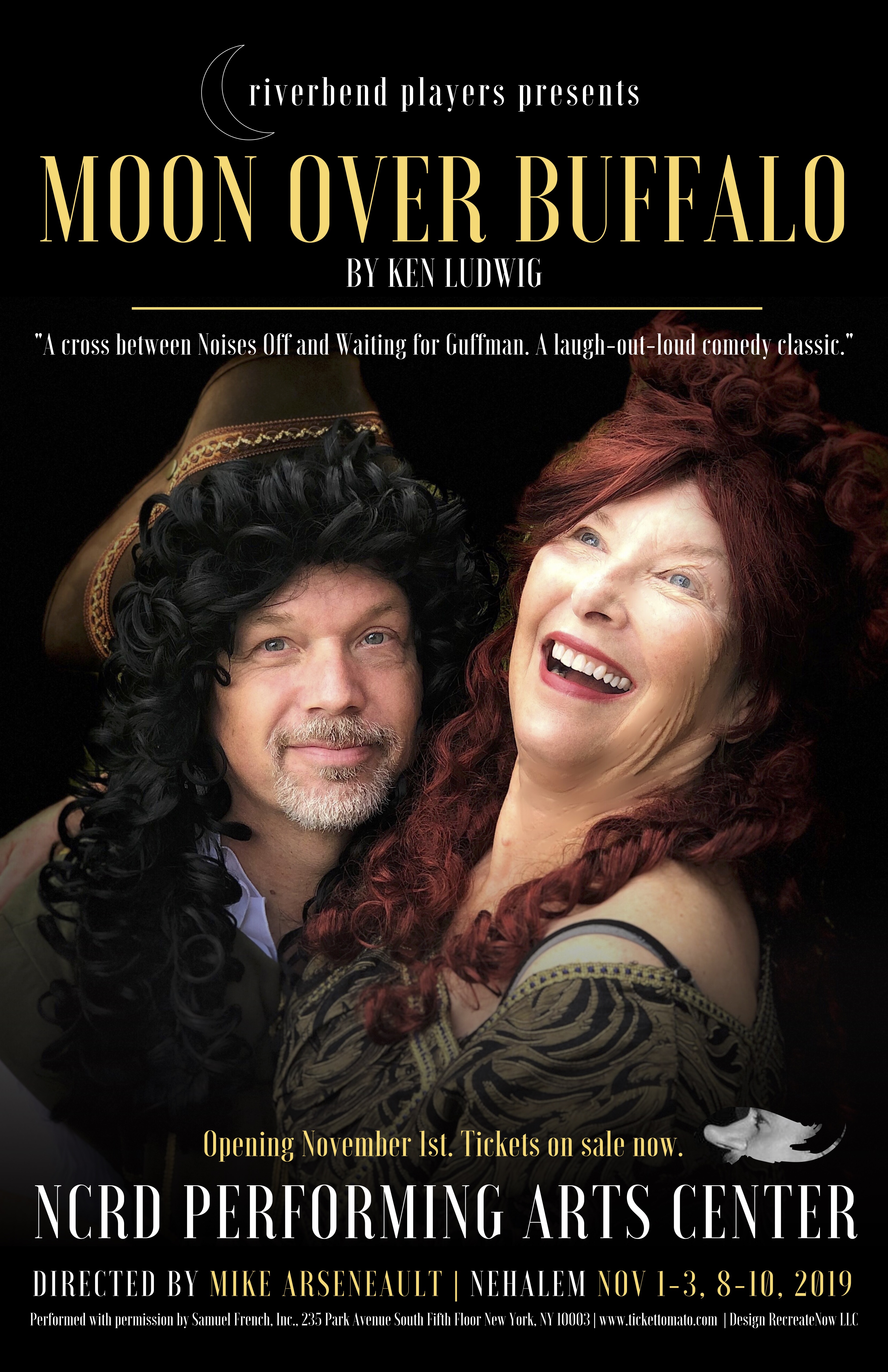 Riverbend Players from Nehalem, Oregon, present the classic comedy MOON OVER BUFFALO by Ken Ludwig opening November 1, 2019, at the NCRD Performing Arts Center, 36155 9th Street, Nehalem, Oregon, 97131. Performance are: Nov 1, 2, 8, 9 at 7pm with 2pm matinees on Nov 3 and 10, 2019. There also be will be a scheduled “Behind The Scenes” Talk Back with the Director, Cast & Crew on Sunday, November 3rd, following the matinee.

Moon Over Buffalo is a 1995 comic play by America playwright Ken Ludwigwhose work has been performed in more than 30 countries in over 20 languages. Some of his best known work includes: Lend Me A Tenor, Crazy for You (the musical), Leading Ladies, Baskerville: A Sherlock Holmes Mystery andMoon Over Buffalo.

Moon Over Buffalo is set in Buffalo, New York in 1953. This 1995 production marked the return of Carol Burnettto the Broadway stage, after a 30-year absence.She and her co-star Philip Bosco both received Tony Award nominations for their roles as Charlotte and George Hay.

In the madcap comedy tradition of Lend me a Tenor, the hilarious Moon Over Buffalocenters on Georgeand Charlotte Hay, fading stars of the 1950’s. At the moment, they’re playing Cyrano De Bergerac and Private Lives in rep in Buffalo, New York, with 5 actors. On the brink of a disastrous split-up caused by George’s dalliance with a young ingénue Eileen, they receive word that they might just have one last shot at stardom: Frank Capra is coming to town to see their matinee, and if likes what he sees, he might cast them in his movie remake of The Scarlet Pimpernel. Unfortunately for George and Charlotte, everything that could go wrong does go wrong, abetted by a visit from their daughter’s clueless fiancé Howard and hilarious uncertainty about which play they’re actually performing, caused by Charlotte’s deaf old stage-manager mother Ethel who hates every bone in George’s body.

This production by Riverbend players is directed by Toronto (Canada)/Portland theater veteran and Rockaway Beach resident Mike Arseneault. Mike has been active on stage professionally and in community theater for close to thirty years. This past year, he was on-stage at NCRD in the one-man musical revue her created called Stages: Songs From Broadway, directed the classic play Love Lettersby A.R. Gurney, performed the role of George Bailey in It’s A Wonderful Life : A Live RadioPlay and reporter Carl Phillips and Stranger in War of The Worlds – 1938 Radio Drama. Coming up, he will be directing an original musical revue that he created called Auditions: The Musicalwhich will be the summer 2020 production for Riverbend Players. Play producer is Jeff Slamal. Assistant Director and ASM is Linda Petersen. Linda Makohon is Costume Coordinator, Judy Holmes is Props Master, Tom Cocklin is Set Designer. Marketing and publicity by RecreateNow Marketing, Rockaway Beach. Many other friends of Riverbend Players have contributed volunteer hours to this production.

Reviews from the original Broadway Production:

“Ken Ludwig is one of those rare contemporary playwrights who thinks in terms of old-fashioned knockabout farce, and that’s something to be cherished.” – The New York Times

“…Moon Over Buffalo is what a staged comedy should be. It is a wild and wacky farce. It’s “Waiting for Guffman” meets “Noises Off” meets your favorite Shakespeare comedy as performed by the Marx Brothers. Be prepared to leave the theater exhausted from laughter.” – The News Tribune, WA

“…Moon Over Buffalo is what a staged comedy should be. It is a wild and wacky farce. It’s “Waiting for Guffman” meets “Noises Off” meets your favorite Shakespeare comedy as performed by the Marx Brothers. Be prepared to leave the theater exhausted from laughter.” – The News Tribune, WA

Founded in 2005 by Phyllis Sanderson, Riverbend Players serve the greater Manzanita, North County, and broader Tillamook County as the resident theater company at NRCD Performing Arts Center. The volunteer troupe draws from over 50 participating community actors. “We have such good talent, the cast actually comprises over 200 years worth of theatre experience, and these productions continue to bring new actors and theater creatives to Riverbend Players.” Riverbend Players is a registered 501(c)(3) non-profit organization.