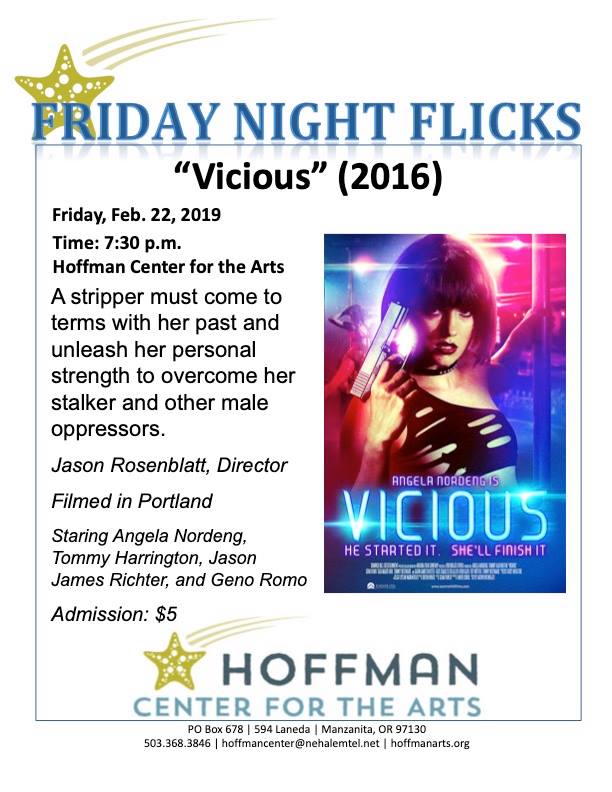 Portland Film “Vicious” to Screen this Friday in Manzanita

Writer/director, plus one of the stars to attend

The Hoffman Center for the Arts in Manzanita will screen the 2016 feature film “Vicious,” written and directed by Oregon independent filmmaker Jason Rosenblatt, Friday, Feb. 22, at 7:30 p.m. Admission will be $5.

Rosenblatt and Geno Romo, one of the stars, plan to attend the screening

Filmed in Portland, “Vicious” tells the story of a young woman who becomes the object of a stalker’s obsession. He refuses to leave her alone until she agrees to quit working as a stripper. She spirals deeper and deeper into the darkness of the world in which her oppressors have trapped her, until she gains the strength to overcome the negative forces acting on her life.

The Hoffman Center screened “Struggles to Connect,” a collection of Rosenblatt’s short works, in May 2018.

Rosenblatt is a writer, director and editor from Portland, with early experience at New Regency Entertainment and Creative Artists Agency. He is the editor for award-winning documentary filmmaker Heather E. Connell and often collaborates with fellow Portland-based filmmaker Sean Parker.

The Manzanita Film Series is a program of the Hoffman Center for the Arts in Manzanita. Films are screened monthly throughout the year.